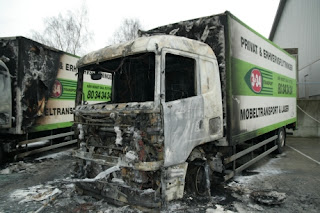 Denmark - Earlier this week two trucks owned by 3x34 Transport, the company responsible for demolishing the Ungdomshuset (Youth House,) were torched. In response to the arson and numerous threats against their vans, materials and personnel the company has decided not to work at the site where the Ungdomshuset stood according to announcement posted on the company's website. The trucks had been parked in lot outside of 3x34 Transport's main office.

Since the Ungdomshuset was evicted last week solidarity actions and demonstrations have been held in various cities across Europe and in New York City. 80 To 100 Greek anarchists occupied the Danish council in Athens for a number of hours. Wroclaw, Poznan and Warsaw, Poland, Prague, Czech Republic, numerous cities throughout Germany, Switzerland, Norway and Great Britain all saw solidarity protests.