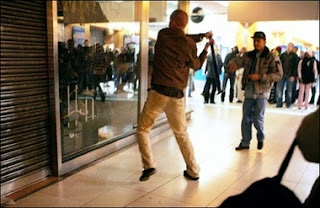 Paris, France - Youths rioted in the Gare du Nord transit hub after one individual was arrested for failing to pay the fare. Rioters, many of whom were traveling to poor suburbs, smashed windows and looted stores and vending machines.

Riot police with attack dogs attempted to restore order and used teargas on the crowds. Disturbances spilled out into nearby streets. In all 13 people were arrested.

The incident quickly became a contentious issue in the presidential election. Politicians have done little to resolve issues that led to 2005's unrest which saw riots on the fringes of urban centers throughout the country.