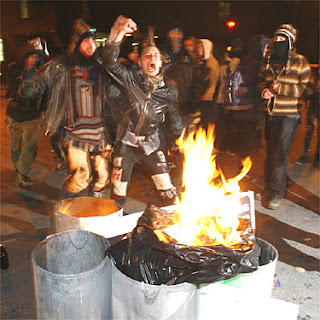 Montreal, Quebec, Canada - Yesterday's demonstrations in observance of the 11th International Day Against Police Brutality broke out in violence as they have in years past. About 500 people marched through the Cote des Neiges district chanting anti-police slogans.

Following the march organized by organized by the Collective Opposed to Police Brutality (commonly known by their French acronym COBP) a little less than half the crowd took the subway downtown where protesters once again built small fires in intersections, tore down political posters and vandalised area businesses including a McDonald's, luxury cars and a police vehicle. Police arrested fifteen suspected rioters. More than twice that number were arrested last year.

Other demonstrations and events marking the day of protest were held across the world including places like Vancouver, British Columbia, New York City, and a number of cities in Mexico.