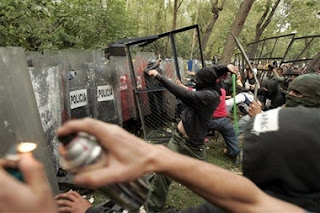 Mexico - U.S. President George W. Bush concluded his week long tour of Latin America yesterday amidst violence and unrest. Each stop on Bush's tour was marked by massive protests and clashes with police. As Bush discussed the U.S.'s plans to build a controversial 700-mile fence along the Mexican border with President Felipe Calderon anarchists and other demonstrators attacked and partially destroyed the fence surrounding the U.S. Embassy in Mexico City.

Protesters took to the streets throughout Mexico with chants such as "Freedom for political prisoners!" and "No more war!." Masked demonstrators used slingshots, rocks, sticks, and improvised flame throwers to attack police who answered with teargas, pepper spray and batons. In Merida protesters kicked the doors in and trashed the Municipality Palace but were eventually driven away by riot police.