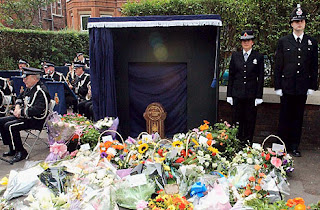 Manchester, England - Vandals destroyed a marble memorial to a slain police and then used the broken pieces of marble to damage police cars outside the Cheetham Hill police station over a half mile away.

The memorial on Crumpsall Lane was installed last September in remembrance of Special Branch officer Stephen Oake who was stabbed to death in 2003 while attempting to subdue a suspected Al Qaeda terrorist. Oake's wife who spoke at the service said that "he was no saint."

Police are very upset about the vandalism which they called a "new level of evil." Even Prime Minister Tony Blair joined the condemnation: saying that those responsible "should be ashamed of themselves." There are no suspects but police have combed the scene for evidence and begun examining CCTV footage from the area in hopes of discovering some clues.