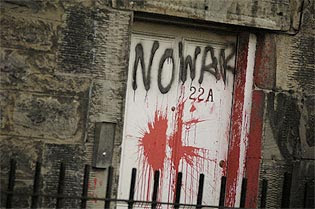 Edinburgh, Scotland - The previously unknown Fuck The War Coalition! has claimed responsibility for trashing the offices of two pro-war Labour Party MPs Nigel Griffiths and Alistair Darling. In a communique the group said that their aim was to bring "a small taste of war to some of those politicians that voted for it." Griffiths' staffers arrived to work Tuesday morning to find four smashed windows, and anti-war slogans painted on the building's walls and front door. Darling's offices, on Rutland Square, were also covered in slogans and Stop The War leaflets scattered around the entrance.