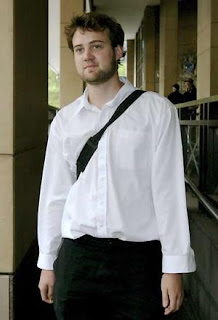 Melbourne, Australia - Four of the five individuals arrested in early morning raids in New South Wales last week made their first appearance before the Melbourne Magistrates Court Tuesday. The other, a 17-year-old youth, was bailed from a Children's Court and did not have to appear. The five Sydney residents are accused of participating in last November's riots that were organized to protest the G20 summit of international financial leaders. They face numerous charges including unlawful assembly, riot, conduct endangering persons and aggravated burglary.

Police made the arrests after reviewing hundreds of hours of surveillance footage taken during the disturbances. They believe that they have correctly identified one of the defendants Daniel Jones, 20, by a distinctively large gap in his front teeth. He was ordered to allow police to photograph his teeth. Jones is accused of causing almost $9500 damage to a police van, throwing a street pole at officers and then yelling abuse at them during the November 18 clashes, and faces charges including affray, riot and criminal damage.

A group of about 30 supporters rallied outside the courthouse to support the defendants. So far prosecutors have brought charges against 27 alleged rioters, most of whom were arrested long after the demonstration ended. The four defendants who went to court Tuesday were released on continuing bail with conditions including reporting to police three times a week, not moving house and not attending points of international departure. There next date will be in May.