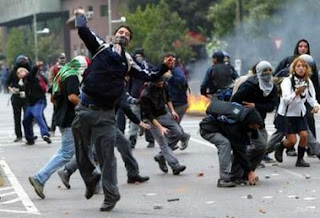 Chile - Thousands of students, most of whom are of high school age, took to the streets in cities across the country, rioting and looting. Thursday marked "The Day of the Young Combatant," which is the anniversary of the deaths of two young brothers, who were murdered by police while demonstrating against the Pinochet dictatorship. Youth blocked traffic with burning barricades, attacked police, looted stores and according to police some were armed with automatic weapons.

One officer was shot while trying to stop looters who had targeted a supermarket. In all more than 100 officers were injured and over 800 people were arrested, but most of them were under the age of 16 and thus too young to be charged. They were quickly released, but in some cases the government plans to sue their parents.

Many of the rioters explained that they were upset over the new urban transportation service. Santiago Governor Marcelo Trivelli said the protests "appear to reflect a general sensation of social dissatisfaction in the country. I think people are somehow showing they want changes and some express that with anger."