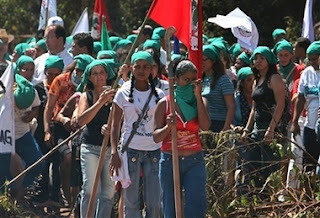 Brazil - Over 500 Landless farmers, most of them women, from the Via Campesina (Peasant Way) and the Movimento dos Trabalhadores Rurais sem Terra (Movimento dos Trabalhadores Rurais sem Terra (Landless Rural Workers' Movement or the MST) invaded and briefly occupied an iron ore mine, a bank and a sugar mill on Wednesday to protest the impact of big companies on the poor and President Bush's visit to Brazil. A press release issued by Via Campesina said that their protest was meant as a statement "against transnational companies and the financial system, which seek control of the natural resources in the country."

The Capao Xavier mine, located in Nova Lima, Minas Gerais, was occupied for four hours at which point police removed all of the demonstrators. The mine is owned by Brazil's Companhia Vale do Rio Doce (CVRD) which is the largest iron ore miner in the world. CVRD claimed that the occupation delayed the excavation 12,000 tonnes of ore costing them thousands of dollars in lost profits. Last year indigenous protesters occupied and shut down another CVRD mine for several days.