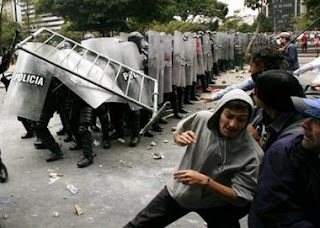 Colombia - Riots and massive protests broke out in several Colombian cities during U.S. President George Bush's brief visit to Bogotá yesterday. There a smaller group of demonstrators broke away from a larger group of more than a thousand marchers and attacked riot police with rocks, molotov cocktails and metal barriers and ripped down lampposts. Four police officers were reported injured and approximately 100 people were arrested. Bush only spent a total of six hours in the country before departing for Guatemala, where large scale anti-Bush demonstrations were also held.