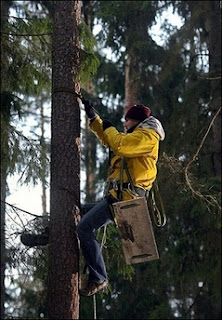 Rospuda valley, Poland – Dozens of environmentalists have established a protest camp in the path of a section of the soon to be built Baltica Highway, linking Poland with Finland, which would destroy a protected nature reserve. Pollution and development that comes with the road along with the heavy construction equipment needed to construct it will drive dozens of rare plants and animals, found only in the bog, to extinction.

The decision to construct the highway violates a European program that protects rare ecological environments. The EU has demanded an explanation and threatened sanctions if the project goes ahead. After massive protests in numerous cities in the region even Poland's First Lady Maria Kaczyński has spoken out against the development.

Protesters have built a series of tree platforms in the threatened valley, 200 km north-east of Warsaw, in order better resist any attempts on the part of the police to forcibly remove them. The international conservationist organization Greenpeace has sent climbers to assist demonstrators.