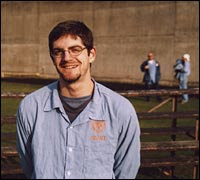 Oregon, U.S. - The Oregon Court of Appeals has ruled that environmentaly motivated arsonist, Jeffrey "Free" Luers, will get a new reduced sentence that could be as much as 15 years shorter than his current one. Luers was sentenced to 23 years in prison in 2001 for burning and damaging three SUVs as a protest meant to call attention to global warming in Eugene.

Luers was convicted of three arson counts and three attempted arson counts. The sentences were ordered to be served consecutively but according to the appeals court Luers' judge should have ordered that they be served concurrent. It's possible that he could be released from prison as early as 2008.