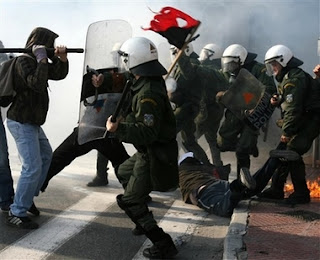 Greece - Anarchists, students and unionists clashed with police in central Athens today, shutting down part of the city for a number of hours. Demonstrators fought police with clubs and pelted them with molotov cocktails and rocks. Police fired teargas at protesters. Similar demonstrations were held across the country in opposition to the government's plan to amend Greece's constitution in order to allow private companies to open universities. Currently all institutions of higher learning are state funded and don't charge tuition.

The northern city of Thessaloniki saw it's second day of protest. Yesterday a group of approximately 250 anarchists and students engaged police outside Thessaloniki University in protest to plans to relax a law that prohibits police from entering university grounds.