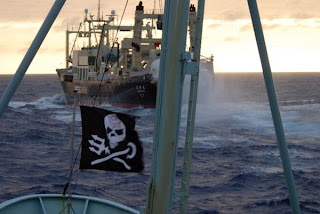 Sea Shepherd crew members aboard small inflatable zodiacs threw bottles of butyric acid on the kill deck of the Nisshin Maru and sealed the decks drain pipes, which dumps whale blood into the ocean.

A few days later the Japanese ship the Kaiko Maru and the Robert Hunter collided. Both ships blamed the other for the incident and both parties claimed that their ships were damaged, but not too damaged as to need assistance.

Captain Paul Watson of the Farley Mowat has announced that he will ram the whaler's flag ship, the Nisshin Maru. Watson claims to have sunk nine whaling ships and rammed a dozen more since he parted way with Greenpeace to found the Sea Shepherd Conservation Society in 1977.