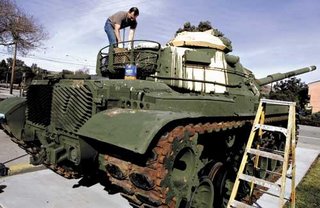 San Luis Obispo, California, U.S. - A 1978 Patton model M60A3 decommissioned U.S. Military tank was repainted with anti-war slogans Monday night. White paint and computer-printed signs on white paper that said "Blood for Oil" and "Operation Iraqi Freedom for Oil" were discovered by police early Tuesday morning. The words "oil" and "murder" on the tank in red paint. The vandal called a local newspaper late Monday night to let them know about the incident and explain the anti-government sentiment behind his action.

There has been a significant spike in protest activity around the country since U.S. military officials announced on Saturday the death of the 3,000th American soldier in Iraq. Most of the protests have been quiet, well behaved vigils that have garnered little attention.