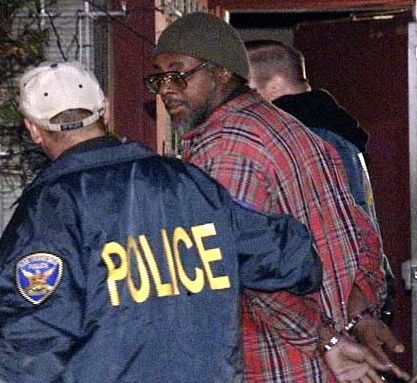 San Fransisco, California, U.S. - Eight veterans of the Black Panther Party (BPP,) seven of whom are accused of belonging to the Black Liberation Army (BLA,) were arrested today on charges stemming from the 1971 shooting death of San Fransisco Police Sgt. John V. Young.

Another suspect, Ronald Stanley Bridgeforth, 62, was still being sought on murder and conspiracy charges. Authorities believe he could be in France, Belize or Tanzania.

Taylor and two others faced murder charges in 1973, but the case was dismissed after a San Francisco judge ruled that torture was used to extract confessions from the men. San Francisco Police Department Inspectors Frank McCoy and Ed Erdelatz were present for the interrogation and torture which consisted of stripping the men naked and beating them with a lead pipe, blind folding them and throwing wool blankets soaked with boiling water over their bodies, placing electric probes on their genitals and other body parts, inserting an electric cattle prod in their anus, punching and kicking, and slamming them into walls while blindfolded.

McCoy and Erdelatz came out of retirement to lead the investigation when the case was reopened sometime in 2002. The decision to re-investigate the incident followed the Department of Justice's expanding prosecution of political crimes in the wake of the September 11th terrorist attacks.

Bell's attorney Stuart Hanlon called the arrests a "prosecution based on vengeance and hate from the '60s." "There's a law enforcement attitude that they hate these people, the Panthers," Hanlon said. "Now they're going after old men."

As in other recent political cold cases, and even some new cases, it seems that the prosecution relied on the grand jury system to gather evidence that had for so long eluded them. In 2005 five former Panthers including Ray Michael Boudreaux, Richard Brown, Hank Jones, Harold Taylor, and John Bowman were jailed for not cooperating with the grand jury.

Jones is now a Pasadena area real estate appraiser in his 70s. He refused to cooperate because of the coercive and punitive nature of the grand jury proceedings . He said "I spent six weeks in San Francisco County Jail, and I'd spend six years if necessary."