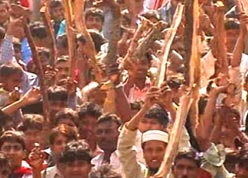 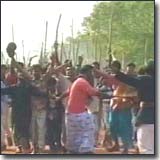 Nandigram, West Bengal, India - Villagers have blockaded all roads and collapsed bridges leading to nine villages in an effort to stop the government and private companies from taking over their farm land to build two Special Economic Zones. The West Bengal Industrial Development Corporation is one of the parties interested in seizing farmer's fields in order to construct a Tata Motors factory.

Clashes broke out between workers and farmers opposed to the land acquisition and government supporters in favor of it. Unofficial reports say that as many as nine people have died in the violence which began on Sunday morning. The region is known as a bastion of anti-capitalist sentiment. Police have not yet been sent into the area. Their presence is expected to result in further bloodshed.