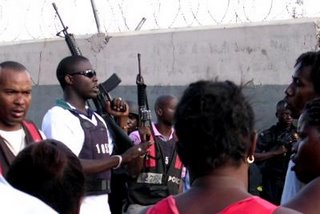 Gutters, Saint Elizabeth, Jamaica - Angry residents shut down sections of the Old Harbour Road after a 24-year-old man, Andre "Stopper" Martin, was shot and wounded by police Tuesday. Police claim that Martin fired on them first with an illegal firearm. Eye-witnesses refute that claim and say that police were the only ones to fire their weapons and did so unprovoked after Martin exited a taxi. Martin was not arrested and has not been seen since the incident.

Protesters lit fires in intersections and stayed out in large numbers throughout the night. A large force of police officers with the assistance from the Old Harbour Fire Personnel were able to clear the road for traffic today, but vehicles have had trouble getting through the area. Last night's shooting occurred less than a week after residents of nearby Glengoffe rioted in protest of a fatal police shooting of two other men.