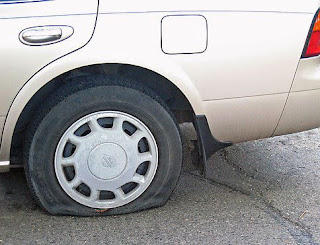 Athens, Ohio, U.S. - The Court Street military recruitment center was vandalized for the second time last night. The tires of two recruiter's cars were slashed, anarchy symbols, and the word “murderer" were painted on the station.

Damon Krane, an organizer with the local anti-war group People Might, said that "this minor vandalism shows that there are people out there who think the appropriate response to ongoing mass murder goes a little farther than candlelight vigils, protest marches and waiting for the next election.” “And quite frankly, I’m not at all sad to hear of recruiters’ tires being slashed.”