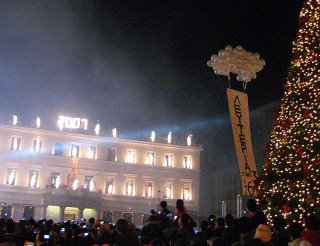 Athens, Greece - A group of some 50 hooded suspected anarchists celebrated the arrival of the new year with an attack on the Korydallos Prison where at least one of their comrades is confined. Tarasios Zadorozni and Gerasimos Kyriakopoulos were arrested following the May 6 2006, riot that targeted the European Social Forum in Athens. 20 people were arrested in connection with the violence, 17 of them are awaiting trial and face multiple felony charges. Zadorozni and Kyriakopoulos are among three who have been denied release pending the start of their trials.

The group who attacked the prison arrived on motorcycles shortly before midnight and threw smoke bombs and fireworks at police officers outside the building. They then dropped leaflets demanding the release of one of the May 6 detainees and left the scene. Police pursued the group and apprehended ten individuals nine of whom were released quickly. The other suspect was arrested and faces prosecution.

Other supporters of the detainees released a banner attached to helium filled balloons, at an official New Year's Eve celebration in downtown Athens. The banner release disrupted the event.

Zadorozni and Kyriakopoulos have been on hunger strike for about a month and have been hospitalized within prison because of their deteriorating health conditions. There have been dozens of solidarity demonstrations throughout the country since the protesters where arrested. In the past month there has been a solidarity demonstration for nearly every day of the month. Anarchists have held marches, occupied radio stations and attacked government buildings.