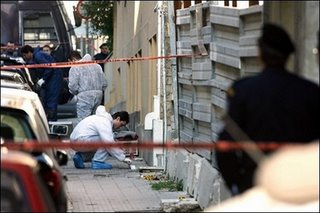 Athens, Greece - The anti-capitalist armed struggle group Revolutionary Struggle (Epanastatikos Aghonas or EA) has claimed credit for a pre-dawn
rocket attack on the U.S. Embassy in Athens. A small anti-tank missile, was fired from across a six-lane boulevard, narrowly missed the large blue-and-white U.S. seal on the embassy's facade and the ambassador's office, and pierced the building above the front entrance shortly before 6 a.m. No one was injured and U.S. officials are claiming that only minor damaged was sustained, though the blast was powerful enough to blow out windows in nearby buildings.

Little is known about Revolutionary Struggle who first appeared three years ago with a bombing attack on the Athens courthouse complex. Some experts have speculated that the group may include or be led by former members of the militant 1970s Marxist group November 17, whose members were thought to have all been imprisoned. Revolutionary Struggle's politics are said to be socialist or even anarchistic.

About three hours earlier the anarchist group Revolutionary Liberation Action firebombed three banks and the suburban offices of the governing New Democracy party. Branches of Greece's Eurobank, National Bank of Greece and General Bank were damaged in the separate attacks. The firebombs were constructed out of small cooking gas canisters. Anarchist "arson gangs" frequently use improvised gas canister bombs in attacks on banks and government targets in the city. This mornings spate of bombings were claimed in support of three anarchist prisoners arrested during last May's European Social Forum riot.