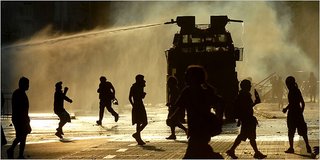 Santiago, Chile - Thousands of joyous revelers took to the streets of Chile's capital Sunday, to celebrate the death of the notorious dictator Augusto Pinochet. Pinochet served as commander in chief of the Chilean army for less than three weeks before he overthrew the left leaning democratically elected government of President Salvador Allende on September 11, 1973.

An estimated 3,000 people were "disappeared" or murdered in the aftermath of the U.S. backed coup including President Allende. Many were sent to concentration camps, buried in mass graves or thrown into the ocean. Pinochet was a well-known human rights violator, violent dictator and used his office to steal 26 million U.S. dollars from the government, which were then laundered through a series of U.S. banks. Ironicaly his death, which was caused by heart failure at age 91, fell on international Human Rights Day.

Police attacked crowds of hooded demonstrators with water cannons and teargas before they could reach the presidential palace. Street fighting soon broke out as demonstrators countered with flying rocks and built flaming barricades. At least six police officers were reported injured. Spontaneous public celebrations also broke out in Madrid, Spain.