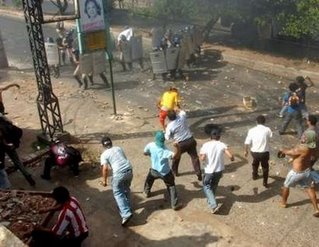 Asuncion, Paraguay - Anger erupted into violence as soon as the verdict was announced clearing three men of murder charges for their role in a tragic 2004 supermarket fire that left at least 369 people dead. Judges instead convicted the men, supermarket owner Juan Pio Paiva, his son Victor Daniel and a guard, Daniel Areco of the lesser charge of negligent homicide. The store lacked the required fire safety exits and those that did exist were locked after the fire began to prevent looting.

Relatives of the victims rushed the judges bench and hurled chairs at the justices. Liz Torres, a member of an association of victims' families called the judges corrupt, and even the prosecutor Edgar Sanchez filed a complaint about bribery.

Violence following the verdict spilled out into the streets. A nearby supermarket owned by the same person was looted and much of its contents destroyed. Cars were torched and at least 30 people were reported injured in clashes with police.