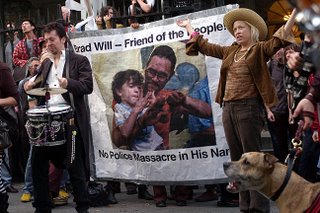 New York, New York, US - Hundreds of friends, family and loved ones of murdered activist and journalist Brad Will gathered in St. Marks Church on the Bowery Saturday afternoon to remember and celebrate his life. A variety of fellow poets, musicians and others who new Brad performed and shared their memories of him. The service ended with folk musician Stephan Smith who moved with the crowd out to the park in front of the church and joined in with the Hungry March Band.

The Hungry March Band along with the Rude Mechanicals Orchestra led a procession into the street and towards the former site of Fifth Street Squat. Brad was a resident of 537-539 East Fifth Street when the city decided to demolish the building following a minor fire in 1997. A wrecking ball had already crashed into the building a number of times leaving a gaping whole when onlookers spotted Brad on the roof waving his arms. On the second try police were able to locate Brad and remove him from the building so that the demolition could proceed.

The next stop on the march was the former site of the
Esperanza Garden where Brad was arrested along with 30 other activist in 2000. The garden was founded on an empty lot in the 1970's by Alecia Torres. Brent Sharman, her son-in-law, addressed the crowd and spoke about Brad and his commitment to the struggle to preserve community gardens, like Esperanza where he was arrested along with 30 others in an act of civil-disobedience.

The march then headed to former school building at 605 East 9th Street. Most recently the building housed Charas El Bohio community center. The city sold Charas to developer Greg Singer and evicted the community center in 2001. The crowd broke through the front door and about 100 people entered the building and redecorated it with messages about Brad and Oaxaca. The building occupation ended without incident or any interference by police about a half hour later and everyone relocated at the community garden La Plaza Cultural.

The past two weeks since news of Brad's death spread protests and outcry spread around the world. Mexican consulates were occupied or shut down in New York City, Indianapolis, Indiana, and Raleigh, North Carolina. Dozens of demonstrations were held world-wide.