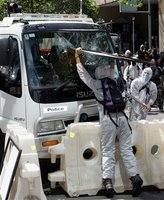 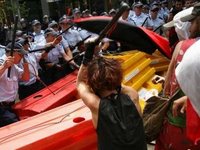 Melbourne, Australia - Anarchist protesters overran police barricades, threw bottles, flares and garbage cans, and smashed and looted a police riot truck as they attempted to reach the site of the G20 summit meeting. The G20 represents the world's 20 richest and most economically powerful nations. It meets annually to discuss world economics and trade.

The 5,000 strong mass of demonstrators caught police off guard. 10 officers were injured, at least one of whom was seriously injured and only seven protesters arrested, but police expect to make more arrests as they review videos and photographs from the demonstrations.