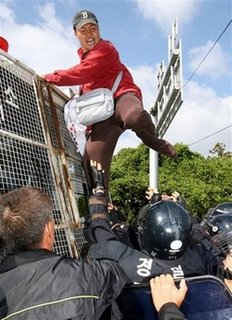 Sogwipo, Jeju Island, South Korea - Embattled trade negotiators from the United States and South Korea will most likely have to schedule a fifth round of talks after the one that began today nearly came to an end when trade ministers from South Korea walked out of sector talks.

To protect the proceedings from angry farmers, unionists, and other demonstrators, who have disrupted past trade talks throughout the world, the southern resort island of Jeju was chosen to host the meeting.

An estimated 11,000 protesters made it to the island. Some attempted to storm the venue but were thwarted by police. 80 or so of the demonstrators swam across the port but were stopped by riot police on the beach. 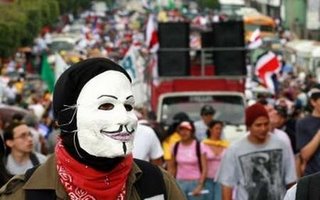 San Jose, Costa Rica - A similar demonstration was held across the world in Costa Rica, where approximately 10,000 protesters marched against the Central American Free Trade Agreement (CAFTA-DR) known locally as TLC. Demonstrations are expected to grow in size on Tuesday.

Critics of the agreements believe that this agreement like NAFTA will further open up their countries to exploitation by large US based corporations. The border will not be any more open to individuals who would like to travel to the US.