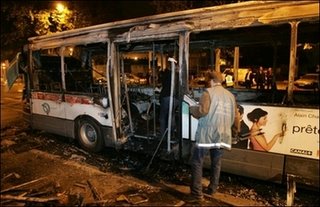 Paris, France - Youth violence is on the rise in anticipation of the upcoming aniversary of last years riots in the suburbs of Paris were many poor second and third generation African immigrants live. Last week a group of 10 to 30 hooded youths ambushed a detail of police officers who were responding to a phony call. The officers were only able to escape from their attackers after drawing their guns, but not before one of them was seriously injured by a rock to his face.

In the past few nights groups youths armed with hand-guns and molotov cocktails have been hijacking buses and then setting them on fire. They have burned three buses so far. No one was reported injured in the bus arsons

The riots last year were touched off by the October 27th accidental electrocution death of 2 boys who were being pursued by police. During the riots 10,000 vehicles were torched, 300 buildings destroyed or damaged, and roving groups clashed with the police. As few of the problems, like joblessness, racism, and boredom, that created the tension have been made better people are still angry.