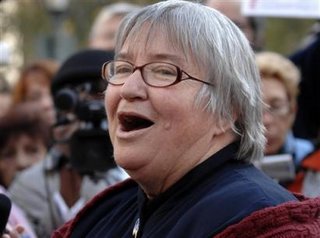 New York, New York, US - Today, former civil rights lawyer Lynne Stewart, who was convicted in 2005 of providing material support to terrorists, was sentenced to 28 months in prison, despite the fact that prosecutors wanted her to serve 30 years. She was found guilty of releasing a statement issued by one of her clients, Omar Abdel-Rahman, a blind sheik sentenced to life in prison for plotting to blow up five New York landmarks and assassinate the Egyptian president. The judge allowed her to remain free while she appeals her conviction and sentence, a process that could take more than a year. The judge stated that while she was a lawyer representing poor, disadvantaged and unpopular clients, "Ms. Stewart performed a public service, not only to her clients, but to the nation." This, of course, was a factor to the downward departure of her sentence, but one of the major concerns stated by Stewart's attorney was her long battle with breast cancer.

Her codefendant, Arabic translator Mohamed Yousry, who was convicted of the same charge as Stewart, received a sentence of one year and eight months, which was also far less than prosecutors wanted. Her other codefendant, US postal worker Ahmed Abdel Sattar, who was convicted of conspiracy to kill and kidnap people in a foreign country, received a sentence of 24 years. He had been facing life in prison, but the judge cited his lack of prior convictions and his restrictive prison conditions, as well as the fact that nobody was killed or injured, as the main reasons for the drastic downward departure of his sentence. Abdel Sattar has been in jail since the three's arrest, which was in April 2002, and his time served will count towards his sentence.