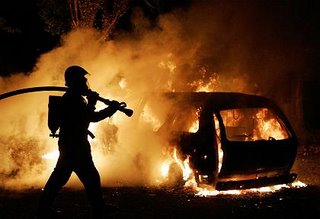 Les Mureaux, France - Anti-police rioting broke out once again in Les Mureaux, a suburb northwest of Paris. The flare up began after a car chase ended in collision at a police roadblock. The driver, who was wanted for traffic violations was taken into custody on the scene.

More than one-hundred angry youths converged on the area and pelted police with rocks and other projectiles and set a police car on fire. One rock landed inside a police vehicle full of officers and punctured a teargas canister. Seven police officers were reported injured. No rioters have been arrested so far.