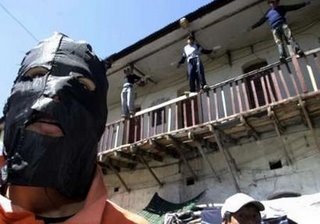 La Paz, Bolivia - Thousands of Bolivian prisoners are on a hunger strike protest and hundreds of others have begun to mutilate themselves in order to draw attention to their cause. A prisoner spokesman, Oscar Romero told reporters that most of the 1600 prisoners at San Pedro Penitentiary in downtown La Paz have sewn their lips shut, had themselves hung on crosses, or buried up to their necks.

The inmates relatives have blocked off all roads adjacent to the prison and set up camps in support of the prisoner's demands. The incarcerated demonstrators are demanding that a series of reforms go into effect that will reduce the penalties for narcotic offenses, make sentencing more flexible, and reduce bail requirements.