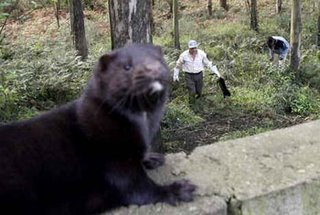 Galicia, Spain - The Animal Liberation Front (ALF) or the Frente de Liberación Animal (FLA) as they are locally known, has claimed credit for what police have called three "almost simultaneous" raids on fur farms. ALF activists liberated approximately 17,000 mink who were being raised in order to be killed for their fur pelts.

Although some of the animals were recaptured one farm owner bemoaned that the mink may now die of natural causes in the wild, which she apparently seems to think would be a worse fate than having their necks broken on the farm.

The ALF was responsible for a raid that liberated thousands of animals from a nearby farm in July of last year. That fur operation later closed as a result of the action.