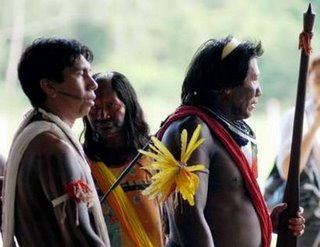 Carajas, Brazil - A group of about 200 hundred Xikrin Indians peacefully ended their occupation of the Carajas mining complex today. Hundreds of natives wielding war clubs and bows and arrows stormed the Amazon mining site, shutting it down, and taking hostages earlier this week.

It is believed that the Indians were demanding more compensation from CVRD.

The Carajas mining complex produces 250,000 tonnes of iron ore daily. The occupation blocked the export of 500,000 tons of ore.

Members of the Guajajara tribe followed through on a threat to block CVRD's railway line from Carajas in December 2005 and then did so again last February and took four CVRD employees hostage to press demands for better public health care. The hostages were freed after two days.