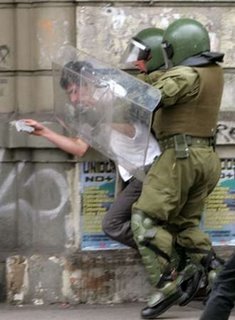 Santiago, Chile - Students, striking teachers and their supporters clashed with police during a 5,000 person march that demanded higher pay and more benefit for teachers and increased funding for schools. Negotiations have been dragging on for months and have already resulted in a number of violent clashes between police and demonstrators. Police used a water cannon on protesters, 68 of whom were arrested, but no serious injuries were reported. 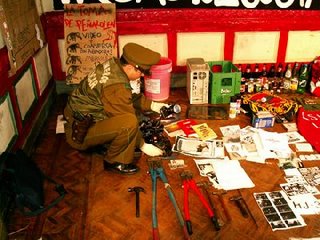 Early in the day police preemptively raided a squatted building and claimed to have found four complete molotov cocktails which they say were made in preparation for today's protest. They also announced that
they had discovered anarchist printed literature, tools, including hammers and bolt cutters and empty beer bottles which could be fashioned into fire-bombs with a few commonly found household ingredients.

Six university students were arrested including one Spaniard Miguel Balaguer, 24, who faces deportation in addition to other charges. In a press conference the General Director of Carabineros (Police) declared that "a network of anarchist activists has been dismantled."