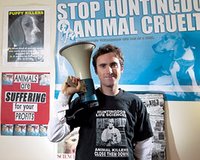 Two more activists Andrew Stepanian, 27, and Darius Fullmer, 29, are scheduled to be sentenced next Tuesday.

Josh was given the maximum possible sentence for the AEPA count, 3 years, and 1 one year for the "black faxing" count which is set to run concurrent.

Josh closed his statement to the court by saying, "From Boston Harbor to the civil rights movement to the modern day animal rights struggle, when correctly applied, I still support the use of direct action and continue to want nothing more than animal liberation."