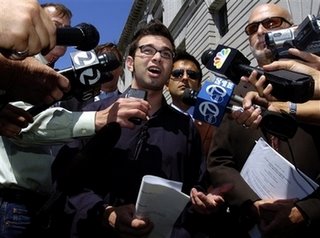 Josh Wolf after being released from jail

San Fransisco, California, US - Freelance journalist and grand jury resister Josh Wolf was granted bail yesterday after spending nearly a month behind bars. Wolf was arrested after refusing to share unedited footage he shot of an anarchist protest against the G8 summit in July 2005, with a grand jury. During the demonstration a police officer suffered a serious head injury and demonstrators allegedly vandalized and attempted to set fire to a police car.

Wolf claims that he did not see the altercation that left the officer injured nor did he capture it on video. He has so far refused to surrender the footage, claiming his journalist right to withhold unpublished material and keep his sources confidential .

A number of organizations have been supporting Wolf's effort to maintain his journalistic integrity including the ACLU, the National Lawyers Guild, Reporters Without Borders, and the Society of Professional Journalists, which contributed $31,000 to defray his legal expenses.

In Wolf's own words cooperating with the grand jury would turn him into "a surveillance camera for the government.'' Many corporate news organizations are believed to willingly share footage with police and so are already made unwelcome at many protests.