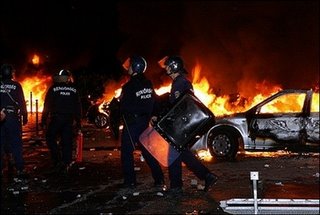 Budapest, Hungary - Angry demonstrators stormed the Liberty Square headquarters of Hungarian state-run television Tuesday and forced it off the air after a recording o the prime minister Gyurcsány Ferenc admitting to lying during last April's election campaign was leaked to the public. The tape was recorded during a closed meeting of the ruling socialist party fraction in May, following their victory at the polls.

Anti-government protesters had been gathering at Kossuth square (in front of the parliament, adjacent to Liberty square) since Sunday evening when the Prime minsters admission was first aired. Rioters flipped and burned cars and destroyed a police water cannon truck.

A participant reported that: the protesters represented mixed political convictions. Many nationalists, football hooligans mixed with the crowd, on Kossuth Square it was mostly right wing, but when we were at the television, the normal non-fascist workers and ghetto kids were kicking one of the cars of the television, while lovers photographed themselves on the top of the burnt-out water cannon... around a smoking car some happy anarchists (the September Eighteenth) distributed leaflets.

By 5 AM the police had broken through the barricades and pushed the few protesters remaining protesters out of the building. Officials stated that 150 people were injured in the riot, more than 100 of whom were police officers.