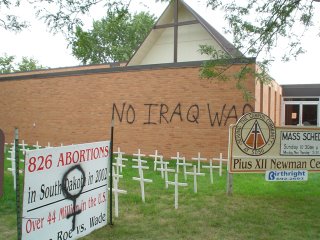 Brookings, South Dakota, US - An anti-abortion sign on the lawn of Pius XII Newman Center at South Dakota State University, was defaced between 1:00 am and 7:00 am this morning. Vandals spray painted a female symbol on the sign and painted “NO IRAQ WAR” on the front of the church. Father Paul Rutten, who lives in the church, couldn't understand a logical connection between the attack on the sign and the anti-war graffiti. Police don't have any suspects in the case.

The sign is part of a display which is set up in different locations around South Dakota each week. The sign displays the number of abortions done in South Dakota in 2002, which was 826, and lists the 44 million abortions done in the U.S. since the Roe v. Wade decision legalizing abortion in the U.S. in 1973. South Dakota hosts only a single abortion clinic in the whole state, which is only open one day a week. The sate is well known as the toughest one in the nation in which to undergo the procedure.