Trenton, New Jersey, US - This afternoon in federal court, Judge Anne Thompson sentenced Andy Stepanian and Darius Fulmer for their participation in the campaign to end cruel animal experimentation by the Huntington Life Sciences (HLS) corporation. Andy and Darius were the last two defendants of the "SHAC 7" to be sentenced. Last week their co-defendants-- four activists and the Stop Huntington Animal Cruelty corporation-- were sentenced to between three and six years in federal prison and were ordered to collectively pay restitution in the amount of $1 million and one dollar to HLS for financial damages.

Both Andy and Darius were convicted of only a single charge of conspiracy to violate the Animal Enterprise Protection Act of 1992 (now known as the Animal Enterprise Terrorism Act.) Andy's involvement in the conspiracy to cause financial damages to HLS was limited to organizing and attending protests. Darius conducted research on HLS and companies that were economically connected to HLS.

Darius was sentenced to serve one year and one day in a minimum security federal prison followed by one year of probation. Part of his sentence was his obligation to participate in a work program in prison, the wages from which will be garnished and paid to HLS as part of the restitution. Darius' steady employment as an emergency medical technician was cited by both defense attorney and judge as evidence of his maturity, compassion, and commitment to helping people in his community. His "light" sentence (in contrast to the two and a half years he was facing, as well as the sentences of his co-defendants) was also attributed to his role in SHAC; his lawyer claimed that his role was not an "obnoxious" one, and the judge agreed that he had not been in a position of leadership as some of his other co-defendants had been. Judge Thompson ordered him to self-report to his local federal marshal in thirty days, and will recommend that he serve his sentence at the federal correctional institution in Fort Dix, New Jersey, and that he be provided with vegan food. His sentence of one year and one day was most probably given because convictions with sentences a year and under are not eligible for appeal.

Andy Stepanian received the a three year sentence, and is the only SHAC defendant to receive the maximum sentence. He was also sentenced to one year of probation following prison, and is also obligated to pay part of the restitution to HLS, having to work in prison to begin to pay it. Upon arriving at court, he was accused by the prosecutor of organizing and promoting a home demonstration at the home of an unknown executive of a company that does business with HLS following a going away party at his house two weeks ago. The prosecutor claimed that this was a violation of his bail restrictions and asked that Andy be remanded immediately and not be allowed to self-report to prison in thirty days as all his other co-defendants will. The judge then heard statements from Andy's lawyer, Andy, and his mother and friend, all asking that he not be sentenced harshly and remanded immediately, and all attesting that he was not the organizer of the recent demonstration.

Andy delivered an eloquent statement to the judge, explaining his values of anti-oppression, anti-animal cruelty, anti-war, anti-racism, and anti-sexism to her. He said that some things had been done in the name of animal rights that "disgusted" him, and that upon hearing the testimony of some who had been the targets of SHAC demonstrations, namely those with small children and children with special needs such as autism who were frightened by the demonstrations, he felt sorry. Holding back tears, he said that when he heard about a female target's used undergarments being sold on the internet, which he had not known about until the trial, he was absolutely appalled, and apologized to her, stating that sexual threats were unacceptable. He pled to both the court as well as the animal rights community to try not to see things as merely "black and white," but to examine grey areas, to examine their tactics and not allow them to compromise their values. 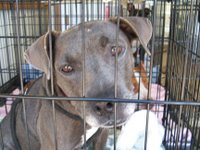 A dog rescued by Andy after Katrina

Andy's mother gave a moving statement, detailing Andy's dedication to helping the community, telling of his work feeding the hungry in his community in Long Island, fixing bicycles for underprivileged children, raising money to travel to hurricane-destroyed New Orleans to bring supplies to flood survivors and rescue abandoned animals, and raising $40,000 for a friend who had cancer so she could receive alternative treatment.

Despite the powerful statements in his defense, Andy's prior arrests (many of which were merely violations, and many of which were dismissed) and convictions, as well as the recent demonstration which he is accused of organizing, were brought up by the prosecutor as "proof" that prison time or potential prison time has not deterred him from continuing to organize against HLS. Although he was not remanded immediately, the judge, citing the home demonstration, said that she was not confident that he wouldn't continue to organize if given another 30 days, and ordered that he self-report to his local federal marshals in exactly two weeks. She will recommend that he serve at FCI Fort Dix, as well, and be provided with vegan food.