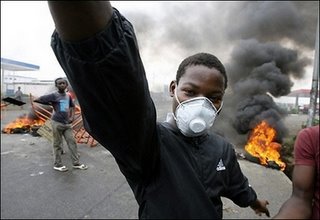 Abidjan, Ivory Coast - Residents of the Akouedo section of the capital set up flaming barricades across busy thoroughfares and rioted in response to eleven toxic sludge pools that were dumped in inhabited public areas. Seven people, including four children, have died from the fumes that cause headaches, vomiting, rashes, fainting, diarrhea, and respiratory problems. 26,000 people have had to seek medical attention after exposure to the fumes.

An angry mob dragged Transport Minister Innocent Anaky Kobenan from his car, beat him, and forced him to breathe in the toxic fumes. His car was set on fire and he is now in serious condition; his wife was also injured. The house of Port Director Marcel Gossio was looted and then burned to the ground.

The waste is a mixture of oil residue and caustic soda used to rinse out the tanks of a Greek-owned cargo ship. The operators of the ship paid a local company, Compagnie Tommy, to dispose of approximately 500 tons of the foul-smelling substance. Eight people, including the heads of Tommy and two other Ivorian companies, have been arrested so far.