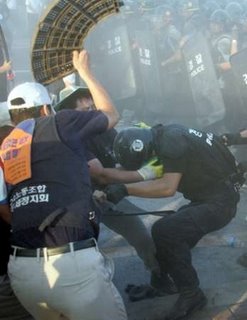 Pohang, South Korea - 5,000 construction workers and other unionists clashed with police during a march to protest the death of another worker who was beaten to death by riot police during a July 16 peaceful sit-in. Korean Federation of Construction Industry Unions (KFCITU) member Ha Joong Keun died on August 1st after languishing in a coma for several weeks.

KFCITU members who work at the Pohang Steel Corporation (POSCO) have been on strike since July 13. POSCO is the world's fourth largest steel producer. Their employees are demanding a pay raise, a five day working week and the right to be treated with dignity and respect in the workplace. The strikers currently work 8 to 10 hours a day, 7 days a week. They live in undignified conditions, with only 7 bathrooms for 3,000 workers and are prohibited from eating while at work. Employees at POSCO plants are required to handle hazardous chemicals including asbestos.