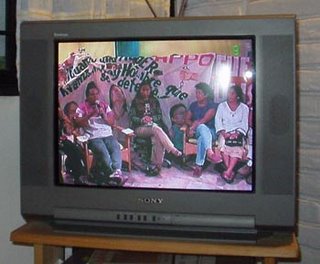 Oaxaca City, Oaxaca, Mexico — A group of about 350 women and children, armed with only wooden spoons, have taken control of the state-owned television station Channel 9. The women are members or supporters of the teachers union who have occupied the city's main plaza for a number of months.

In June a large highly militarized and brutal police force attempted to disperse protesters them. During the assault at least one child and one teacher were killed and other have been reported missing or "disappeared." Police have kept a very low profile in the city since but there have been a number of incidents were individuals suspected of being police have fired weapons in the air in order to threaten or intimidate demonstrators.

The women are now using the station to broadcasting on two radio frequencies and airing a video of the June 14th police action on Channel 9. Every government building has been occupied by the demonstrators who are now calling for the resignation of Governor Ulises Ruiz Ortiz.