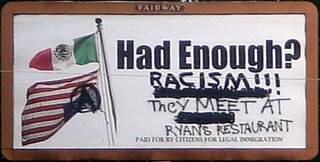 Asheville, North Carolina, US - A Buncombe County Republican Action Club immigration billboard decried as racist by critics was defaced and altered by anarchists. One of the two signs the group paid for has been vandalized on two separate occasions. The Patton Avenue billboard features an American flag turned upside-down beneath a Mexican flag and has a caption that reads "Had Enough?." An upside American flag is an international distress signal.

Last month someone blacked out the groups website and painted the word "RACISM" under the question "Had Enough?." Recently vandals returned and painted "They MEET AT RYAN'S RESTAURANT." Presumably the most recent addition is meant to allow people to confront the anti-immigration proponents face-to-face. At one point a circle "A" anarchy symbol was painted over the American flag.