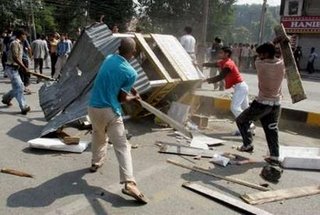 Srinagar, Indian controlled Kashmir - Thousands of people took to the streets in protest after Indian paramilitaries shot and killed 31 year-old Inayatullah Baht, an unarmed shopkeeper. The Central Reserve Police Force said that they were forced to shoot because Baht was running in a suspicious manner outside of his home and bakery on Friday evening. A friend said that Baht was simply out for a walk after work when he was shot down in the street.

India who controls much of southern Kashmir has fought three major conflicts in order to gain or increase its authority over the region. More than a dozen national liberation groups have been fighting to overthrow India over the course of the past 15 years. More than 67,000 people most of them civilians have died in the fighting.