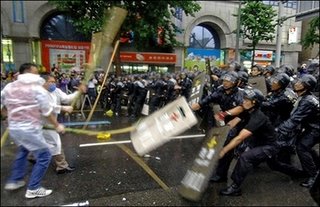 Seoul, South Korea - More than 10,000 protesters marched in opposition to newly renewed trade talks between the US and South Korea. Demonstrators clashed with some of the 2000 riot police who had been ordered to protect the Seoul hotel that hosted the negotiations. Barricades and riot police also had to be set up and stationed around the US embassy. Many of the protesters represent trade unions, farmers, and actors who would be affected by the lowering of trade barriers that protect their industries. More rallies and actions are planned for the week as talks are scheduled to continue.