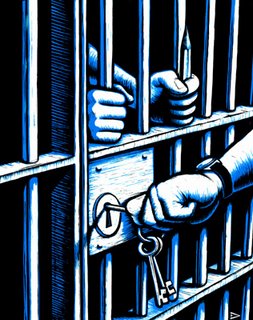 Pisa, Italy - On July 7th, six members of Il Silvestre collective who published the green anarchist magazine Terra Selvaggia (Wild Earth) were convicted of activities associated with the Marxist group COR (Revolutionary Offensive Cells). Five of their co-defendants were found not guilty. The defendants were arrested in the summer of 2004 after a COR communiqué was published in their Terra Selvaggia magazine. During a police raid on their Via del Cuore (House of the Heart) home, an original copy of the communiqué was discovered. William Frediani, Francesco Gioia, Costantino Ragusa, Alessio Perondi, Benedetta Galante, and Leonardo Landi were each sentenced to between 3 1/2 and 6 years in prison.

Supporters who attended the trial have called it a farce and an act of "state censorship." The sole evidence the government was able to provide was the original copy of the COR communiqué, which the defendants claim was sent to them anonymously through the mail. That same letter was also sent to other two newspapers. Additionally, prosecutors pointed to the group's radical insurectionary publication Terra Selvaggia and their prison support for jailed Swiss environmental saboteur Marco Camenisch, who served a 12-year sentence in Italy for destroying electricity pylons.

COR claimed responsibility for between 20 and 30 bombings and arsons in mid-2003. The group targeted Italy’s major union headquarters, as well as members of 3 major political parties: the National Alliance (AN), Forza Italia, and Italia dei Valorias. The group also attacked newspapers, temporary job agencies, and the barracks of the Carabinieri, a military police force whose jurisdiction includes civilians. Following the arrests, COR issued a statement saying that Il Silvestre had nothing to do with their actions and said that they planned to continue attacks in Italy.

COR's politics seem to be an amalgamation of anarchism, Marxism, and environmentalism, and the language found in its communiqués is laced with Communist overtones. Il Silvestre is a green anarchist group that had little more than a limited affinity with COR, and whose ideology is starkly different. COR aims to "act as a link between various fighting Communist revolutionary components, and insurrectional anarchist and anti-imperialist groups" across the world.