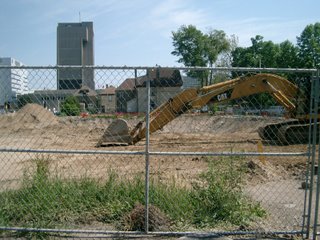 London, Ontario, Canada - More sabotage has been reported at a number of London construction sites including a Home Depot and a Toyota dealership. At the Home Depot site vandals broke into the construction trailer, got cement and filled fuel tanks in excavating equipment with cement powder. John Gautreau, a superintendent with Hayman Construction Inc. said. "something like 'Save our Earth,' " was written on the windshield of an excavator. Gravel was also inserted into fuel and oil tanks and wires were snipped. Whoever did the damage "would know gravel would cause a great deal of damage," said Michael Hayman an executive at Hayman Construction.

A nearby site on Wharncliffe Road, was hit a second time, this time at Elgin Construction, vandals cut wires in at least two machines and filled fuel tanks with gravel.

Ontario has seen a serious rash of environmentaly motivated arsons and acts of sabotage in the past few months, many of which have been claimed on behalf of the Earth Liberation Front (ELF). Other actions reported earlier in the week are estimated to have caused more than $100,000 in damage. Repairing the eight heavy machines damaged at the Home Depot site is estimated to cost $30,000 alone.