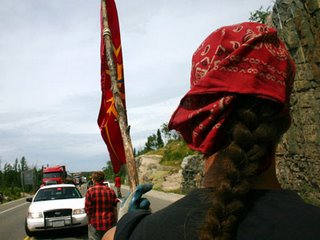 Kenora, Ontario, Canada - Indigenous residents, environmentalists and their supporters shut down a portion of the Trans-Canadian Highway to demand an end to clear-cut logging on traditional native land. The 100 or so demonstrators blocked the road with a thirty-foot tripod that one demonstrator perched on top of. A banner attached to the top or the tripod read "Save Grassy Narrows Boreal Forest". Other protesters locked themselves to cement filled oil drums and the axle of a Weyerhaeuser logging truck.

The action was organized in part by the Rainforest Action Network (RAN) as part of their Earth Justice Gathering 2006, a week of workshops, trainings, stories, campfires, feasting, music and action at the Grassy Narrows blockade.

Weyerhaeuser, the world's largest logging company, has a reputation for clear cutting and logging forests in an environmentally irresponsible manner and trampling the rights of indigenous peoples who claim the land.

"The clear-cutting of the land is an attack on our people," said Roberta Keesick, a Grassy Narrows blockader, grandmother, and trapper. "The land is the basis of who we are. Our culture is a land-based culture, and the destruction of the land is the destruction of our culture. Weyerhaeuser and the McGuinty government don't want us on the land, they want us out of the way so they can take the resources. We can't allow them to carry on with this cultural genocide."

The blockaders said that they would allow vehicles that were not involved with the logging to pass but the Ontario Provincial Police have diverted all traffic through smaller Kenora roads rather than attempt to dislodge the blockade. (Pictures)