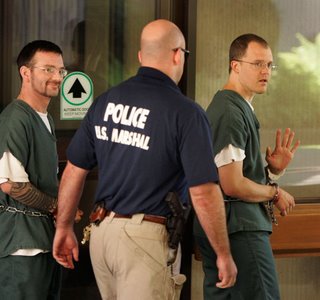 Each of the named defendants have agreed to cooperate and provide assistance to the government in the investigation and prosecution of other accused co-conspirators involved in arson, conspiracy and related crimes. Although they were previously facing minimum terms of life in prison in the event of their convictions, the government has made a nonbinding agreement to recommend that they serve between three and fifteen years in prison in exchange for their assistance in helping the government to convict their remaining co-defendants. The plea agreements are sealed and further details are being kept secret for now at the request of the defendants and their lawyers.

Only four defendants -- Daniel McGowan, Jonathan Paul, Nathan Block, and Joyanna Zacher –- are continuing to plead not guilty. They are currently scheduled for trial on October 31st, but that date is likely to be pushed back until next year. The government has accused an additional four other individuals of participating in the crimes, but they have yet to be located.

There are also a three unindicted co-operating co-conspirators -- Jacob Ferguson, and Jennifer Kolar, Lacey Philabaum -- who have been assisting the prosecution with their case and may be indicted soon.