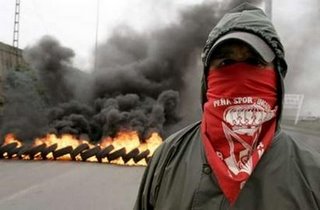 Gijon, Basque, Spain - Hundreds of Izar Shipyard workers erected fiery barricades on three roadways in protest of the government's plan to privatize a number of shipyards and eliminate thousands of employees. Similar blockades sprang up in the city of Sestao last week and last month in the southern city of Seville as well as in Gijon.

The protest has yet to build to the size and level of violence that was seen during the early 2004 strike over wages and conditions. Then unionists fought police with petrol bombs, rocks, sling-shots and homemade rockets. Dozens of people were injured during the violent clashes.