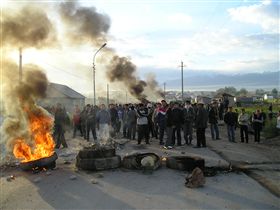 Almaty, Kazakhstan - 150 riot police officers, armed with rubber bullets and clubs, staged an early morning assault on a 5,000 person strong squatter community in "Shanyrak-1" district. Residents, many of whom were wearing balaclavas and wielding iron bars, had prepared barricades out of cement, barbed wire, and burning tires and defended themselves with rocks, molotov cocktails, and exploding gas cylinders. During the fighting two police officers were taken hostage, but were released after negotiations in which the police agreed to withdraw from the area.

"I'd rather die than leave my home. I am prepared to fight to the end," shouted Maksud, a man in his thirties with a crudely made molotov cocktail in his hand. Other demonstrators shouted "This is our land!"

At least 15 officers were hospitalized and a fire truck was burned. Two officers and one protester who were badly burned are in "grave" condition, and dozens of residents were reported injured, including one who was also badly burned.